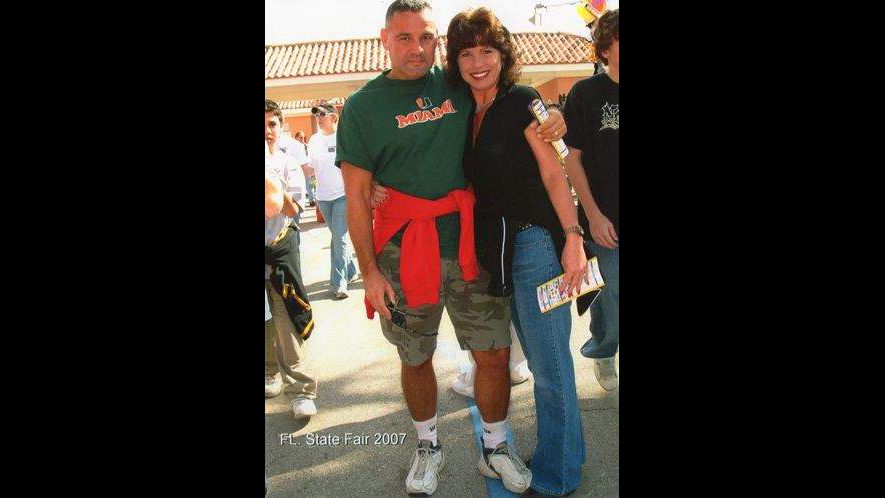 Lara Guerrero’s husband has been dead for nearly four years. She keeps his urn by her bedside and kisses it each morning and night. She tells her husband’s ashes about her day, how the kids are doing, how much she loves him and misses him. Guerrero does not believe her pain will ever lift. She is 42.

“I miss my husband so much,” Guerrero said Tuesday, days after a jury awarded her husband’s estate $7 million in a wrongful-death lawsuit against the Pasco County government. It is the largest jury award that risk claims manager Jane Calano, who has worked for the county 27 years, can remember.

Victor Guerrero was killed May 1, 2008, while riding his motorcycle in Pasco County. The Tampa police officer and his wife, Lara, would spend Valentine’s Day at the Florida State Fair. He was on his way to visit his mother when a county truck turned in front of him.

“He was my heart, my best friend. He was my everything,” Lara Guerrero said as she sobbed. “And he was taken away.”

Victor Guerrero, 47, was a Marine and 20-year-veteran of the Tampa Police Department. On May 1, 2008, he was riding his motorcycle south on U.S. 41 when a county-owned pickup turned left in front of him. Guerrero hit the right side of the truck and the impact hurled him off his bike. He was flown to St. Joseph’s Hospital and pronounced dead on arrival. Guerrero was not wearing a helmet, but state law does not require it of motorcyclists. Guerrero, his wife and her three children lived in Brooksville. He raised her children as his own, and he also had three children from a previous marriage, so he was a father to six. The crash happened just before 1 p.m. on a Thursday. Guerrero, who was born in Cuba, was off duty and headed to Tampa to see his mother, whom he had coffee with nearly every day.

The driver of the pickup, Daniel Whipple, 56, was cited for failing to yield while making a left turn. Whipple, who works in project management for the county, testified in court during the civil trial last week that he did not see the bike.

Lara Guerrero said she cried looking at Whipple. “He took our dreams away,” she said.

Guerrero’s attorney, Dennis A. Koltun, said he felt “relief and exhilaration” when the jury announced its verdict, which was higher than the $5.1 million Koltun requested. The total awarded was $7.85 million, but the jury reduced it by 10 percent because it found Victor Guerrero was partially responsible because he did not wear a helmet. With the 10 percent reduction, Victor Guerrero’s estate would get about $990,000 for lost wages; his three sons would each receive $1.57 million; and his wife would receive $1.35 million.

It might be difficult for the Guerrero family to receive any money, though.

The county has 30 days to appeal. If it does not appeal, the county has to pay only $200,000 — receiving any more money than that from a county agency requires an act of the Legislature. Koltun said his firm will have to hire a lobbyist to get a politician to sponsor a claims bill.

“Even though a jury of their peers has spoken, this doesn’t end the tragedy and it brings no comfort to the family,” Koltun said. “This continues to go on.”

Assistant county attorney Anthony Salzano said it is too early to say what the county will do.

“We are currently reviewing our options and deciding the best way to proceed,” he said.

Lara and Victor Guerrero had been together for 12 years and married for nearly two when he died. They met at a Home Depot in Tampa. She worked as a cashier. He worked security on his days off from the Police Department. They built their dream house in Brooksville on 5 acres. The couple and their kids would roast marshmallows and lie outside on their backs looking at the stars. Lara and Victor left love notes in the house for each other. This is where they were going to grow old together. The other day, while at a mall with her sons, Lara Guerrero saw an elderly couple holding hands and she wept.

“That was supposed to be us,” she said.

Holidays are hollow for her now. Her husband loved them. They had traditions for each. On Valentine’s Day, they always went to the Florida State Fair and had fun eating the crazy food. For this Valentine’s Day, Lara Guerrero decorated her husband’s crash site with flowers and balloons that said “I love you.” She visits the roadside site once or twice a month to put fresh flowers there. For Christmas, she decorates it with tiny Christmas trees. Lara Guerrero moved to Ocala a few months after her husband died so she and the children could be near her parents. There were too many memories here.

“It’s not any easier,” she said. “The ghosts will follow you.”

Times researcher Natalie Watson contributed to this story. Erin Sullivan can be reached at esullivan@tampabay.com or (727) 869-6229.